Born, raised and educated in Germany. Cologne was my first home town, where I graduated from the Cologne Academy of Fine Arts (Koelner Werkschulen) in 1961 at age 20.

Visited the USA on a work visa in 1961, got a job as a graphic designer & illustrator at ABC Television in New York for one year.

Took the Western Route back to Germany, met my future husband in San Francisco, stayed for 2 years – got a job as the “Art Department”, (illustration, copy writing & publicity) at Benioff’s Women’s Department store in San Francisco.

Returned to Germany for a spell, decided that America was OK, married the Yank in S.F., and for the next 8 years worked as a freelancer, doing illustrations and animations for Levy Strauss, Sesame Street & others through various advertising agencies.

Personally, fine art and advertising art were not compatible. In 1972 we relocated to a remote area on the Northern California coast. At that time I decided that a complete break with advertising art was necessary in order to advance creatively in the painting field.

Because of space restrictions and the toxic nature of oil paints I switched over to watercolor, which I continued until 1990 when my studio was completed. I then returned to my first love: oil painting. A constant in my work has been the application of 23K gold leaf as an integral part, whether on paper or linen.

I work mainly in series-form. The themes have run the gamut from nature metamorphoses, animal territorialism, human economic circumstances, personal and general environmental observations and assessments, social and political hierarchies – and now back to flora… with a bite.

In 1977 I had a solo show at the Goethe institute in San Francisco and in 1982 at the Paper Mill Gallery in Los Angeles. In 1984 my work came to the attention of Sandy Milliken of Alexander F. Milliken Gallery in Soho, New York, where I had solo exhibitions in 1985 and 1987 and was also included in several group shows, up until 1991 when he closed his gallery.

Since then I have had the luxury to completely concentrate on my work, but have exhibited numerous times in regional galleries and institutions. 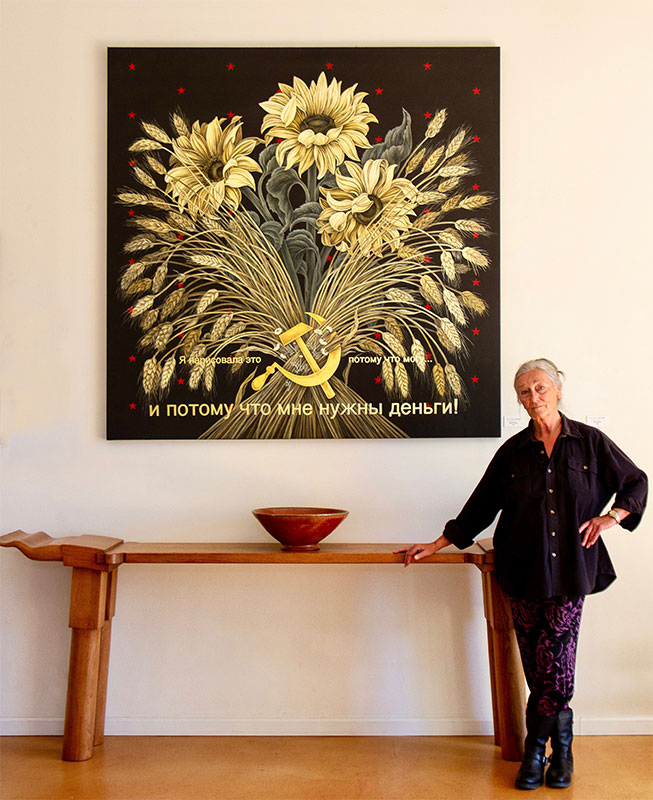